Welcome to the motorcarsoft.com forum, How to register on this forum? 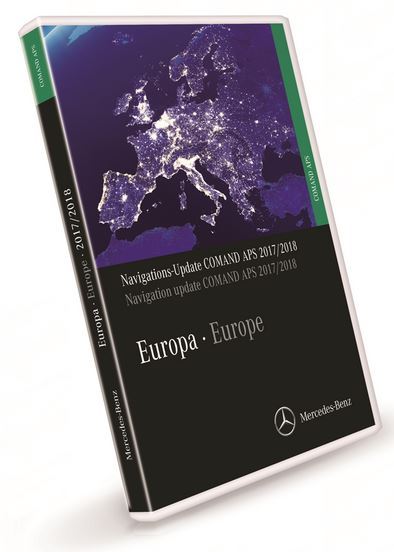 Updated navigation data for the navigation device COMAND APS (NTG 1).
The rugged DVD with navigation data for 38 countries in Europe, with roads and paths, cities, villages and many special destinations:
Albania, Andorra, Belgium, Bosnia and Herzegovina, Bulgaria, Denmark, Germany, Estonia, Finland, France, Gibraltar,
Greece, Great Britain, Ireland, Italy, Croatia, Latvia, Liechtenstein, Lithuania, Luxembourg, Macedonia (F.Y.R.O.M),
Monaco, the Netherlands, Norway, Austria, Poland, Portugal, Romania, San Marino, Sweden, Switzerland, Serbia, Slovak Republic,
Slovenia, Spain, Czech Republic, Hungary and Vatican City.
All of Western Europe is covered by the 2017/2018 version!
The navigation in version 2017/2018 is well-known across Europe with 10.2 million road kilometers. In Eastern Europe, in addition to the Baltic states,
Greece, Croatia, Poland, the Slovak Republic, Slovenia, the Czech Republic and Hungary, as well as Bulgaria and Romania.
In the following countries, Prime Coverage * was significantly expanded: Poland: + 2%, Slovenia: + 6%, Hungary: + 2%.
Thanks to intensive processing, the quality of the maps of the Czech Republic has been significantly increased (101,622 km of prime coverage *,
opposite 86.187 km in the previous version). With the 2017/2018 version, 90,789 cities and municipalities are to be steered. Accurate navigation extended to the searched house number:
While house numbers in the central and northern European countries are largely covered,
the coverage could be improved in the following countries: Bulgaria: + 5%, Serbia: + 16%.

Dynamic route guidance based on current traffic data (TMC / RDS):
On the basis of the data of the Traffic Message Channel, the navigation takes account of current traffic warnings for motorways and automatically calculates diversions.
This comfortable service is now available in 38 countries.

Updates on the road network:
Card updates include millions of changes, such as e.g. new roads, crossroads, bypasses, connecting points and motorway
Descents. A road section can have up to 260 characteristics, e.g. the number of lanes or one-way streets.
All these attributes, but also the considerable number of special targets. must be constantly updated.
In this new update, e.g. over 70,727 roundabouts, 558,989 turn restrictions, 61,803 one-way streets and 1,114,281 street names.
In addition, over 2,032,622 kilometers of roads were updated including approximately 1,808 motorway and expressway sections.

Comment s'enregistrer sur le forum ?
How to register on the forum ?